Recently we have partnered with the Itinerum project at Concordia University to test real time text messages signalling users with the carbon footprint of their transportation movements.

We are pursuing a partnership with the LEED Arc Platform to test whether we help the users of LEED certified buildings on the McGill campus reduce their transportation impacts and thus improve LEED scores.

We are currently exploring the following questions: 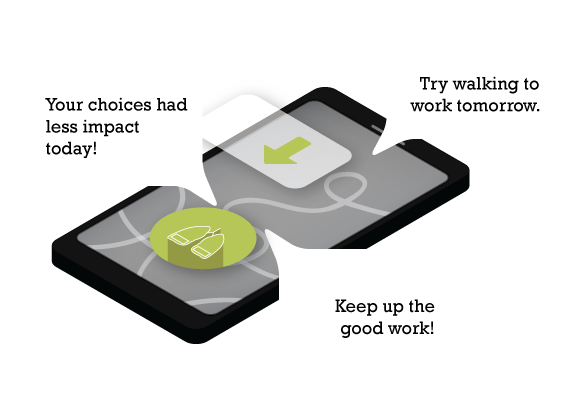 We are also pursuing research on the governance of data gathering and the algorithms used to nudge behaviour. Our research hypothesis in that regard is that users will be more willing to share data if they have verifiable privacy protection following the principles of privacy by design, have the right to be forgotten, can trace how their data is used, and are involved directly in platform governance.

Artificial intelligence and machine learning are essential to Myko being able to deliver a seamless, simple and smart user experience in near real-time.

Our first application of AI focused on transportation mode. We’ve sought to further increase the passive nature of the app’s GPS reporting ability by training a recurrent neural network to predict the user transportation mode without need for explicit user input. So far, we’ve reached a testing accuracy of 87%, and hope further testing with ensemble methods will yield even greater results.

This work is being expanded to activity prediction, which is useful for assessing user habits and behaviours leading more accurate and comprehensive nudging. Nudging itself would also be improved through user feedback. While initially, users would be encouraged through generic nudges, over time, A/B testing and other techniques will help improve effectiveness. If an appropriate feedback metric could be found, this could eventually become an AI task.

Myko plans using AI as we expand beyond transportation and general habits into consumption tracking. While the preference for debit/credit cards over payment apps in the west makes this more difficult, we believe that it should still be fairly simple to recognize trips where certain classes of items are bought (likely limited to food to begin with) and get the user to snap a photo or manually enter their purchase list. We would use image recognition in conjunction with life cycle analysis to create a consumption profile that could give users a better idea of the impact of their diet, and what alternatives might exist.

AI can potentially play an important role in user governance of our platform since we cannot expect users to monitor data use in real time. Instead, we imagine that AI agents might be deployed to represent a set of user preferences and have already done some thinking along these lines in relation to AI-DAO (distributed autonomous organization) governance of the blockchain.

Today, Myko is focused on bringing climate change into sustainable limits through our predictive real-time feedback mechanisms and nudges that are helping individuals, communities and businesses reduce their carbon footprint.

In the future, we want to collaborate with mission-aligned partners to ensure expand our impact beyond climate. In addition to transportation, energy and general habits Myko wants to include consumption and health applications and eventually incorporate aspects of data and environmental governance to the platform and develop robust and predictive approaches for changing behaviours that impact the highest risk of the other 8 planetary boundaries including the loss of biosphere integrity (biodiversity loss and extinctions) and nitrogen and phosphorus flows to the biosphere and oceans and land system change.  Together, we want to structure problems, data sources and availability, and develop new application and user interface ideas that might emerge during the course of development and test our ability to help individuals, communities and businesses change their behaviour for the good of the planet.